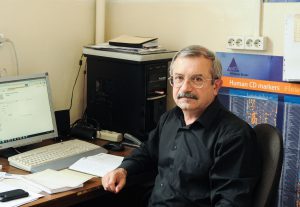 Belyaev Nikolay Nikolaevich (he was born in 1953)

Nikolai Nikolaevich Belyaev began his scientific work in the Kazakh branch of the Institute of nutrition of the USSR Academy of Sciences in 1976. A year later he continued his work in the Kazakh research Institute of epidemiology, Microbiology and infectious diseases of the Ministry of health of the Kazakh SSR, where in 1982 he defended his thesis in “Allergology and immunology”. In 1985, Belyaev N.N. became a member of the Institute of molecular biology and biochemistry (IMBB), where he was invited by Murat Abenovich Aitkhozhin for the organization of a new Institute direction post-fusional technology for obtaining monoclonal antibodies, which N.N. Belyaev mastered in the laboratory of immunology of the all-Union cardiological research Center (Moscow) on the initiative of M.A. Aitkhozhin. After training in Moscow, 1986, N.N. Belyaev became the head of the immunology group, organized within the new laboratory of the Institute – the laboratory of genetic engineering, headed by Anatoly Borisovich Beklemishev. The result of scientific work of group N.N. Belyaeva was a hybrid, secreting monoclonal antibodies to such important proteins for medicine, as staphylococcal alpha-toxin, staphylococcal enterotoxin A, human alpha-fetoprotein and human choriogonadotropin. Subsequently, on the basis of these antibodies, enzyme immunoassay diagnostic test systems were developed, and the intellectual potential of the work was realized in two PhD theses, which successfully defended R.T. Tleulieva (1995) and S.A. Sinenko (1999) under the leadership of N.N. Belyaev together with A.B. Beklemishev (R.T. Tleulieva). From 1989 to 2010 on the initiative of  N.N. Belyaev conducted studies of poorly studied at the time of natural immunosuppressive cells found in the bone marrow, the result of these works were two master’s theses on the mechanisms of influence on natural suppressor cells of histamine and alpha-fetoprotein, made G.K. Zakiryanova (1993) and A.Yu. Bogdanov (2005).

In 1994, N.N. Belyaev defended his doctoral thesis on “the Study of the mechanisms of histamine participation in immunopathology and immunoregulation” in the specialty “Allergology and immunology”, and in 1997 he was awarded the title of Professor in the specialty “Biology”. After defending his doctoral thesis N.N. Belyaev served as Deputy Director for science and management of IMBB (1995-2000). Performing administrative work, he simultaneously developed a new scientific direction for Kazakhstan – molecular and cellular immunology and immunobiotechnology, first as the head of the group “Molecular immunology and immunobiotechnology” (1996), and then as the head, an independent laboratory under the same name (1997).

From 2005 to 2011 laboratory “Molecular immunology and immunobiotechnology” under the leadership of N.N. Belyaev studied the biology of hematopoietic stem cells (HSCs), including their clinical, diagnostic and therapeutic significance, as well as the development of new biotechnological approaches to their production from peripheral blood and reproduction in vitro. Together with the staff of the A.N. Syzganov Scientific center of surgery Ministry of health of the Republic of Kazakhstan, the Institute of cardiology and internal diseases MH RK, Belyaev N.N. organized three study HSCs under the three government Programs (2006-2008). The results obtained from these studies were presented to the laboratory staff at several international conferences and symposia (England, France, Japan, Germany, USA, Russia, Kazakhstan), published in Kazakhstani and foreign scientific journals and three monographs, and has also been implemented in the form of two patents. A series of studies hematopoietic stem cells (HSCs) have ended the defense of the doctoral candidate (T.M. Bogdanova – 2010) and doctoral theses (A.Yu. Bogdanov – 2010), revealing the molecular mechanisms of regulation of HSC activity by alpha-fetoprotein.

By 2012, based on previous research N.N. Belyaev with a team of laboratory staff developed a new scientific direction associated with the study of immunosuppressive cells, including myeloid suppressor cells (MDSC), T-regulatory cells (Treg) and NK-regulatory cells (NKreg), involved in the pathogenesis of cancer and autoimmune diseases. The final stage of N.N. Belyaev’s activity in the Laboratory of molecular immunology and immunobiotechnology is characterized by high publication activity of employees. From 2012 to 2019 fifteen articles were published in English in peer-reviewed international journals indexed by Web of Science and Scopus and two chapters in two monographs published in the United States. Under the leadership of N.N. Belyaev in this period were prepared and defended PhD thesis of Yu.V. Perfileva (2012) (tutorial in collaboration with G.K. Zakiryanova) and PhD thesis of E.O. Ostapchuk (2016), which was devoted to the study of NK cells and Treg – and NKreg-cells in breast cancer.

Over the years, immunological direction of the Institute, founded by N.N. Belyaev, staff has published more than 250 scientific publications, has obtained 7 patents and patents RK. Under N.N. Belyaev was completed and defended 7 PhD theses, 1 PhD thesis, in 3 doctoral theses, he was a scientific consultant. N.N. Belyaev is the author and co-author of about 300 scientific works, including 5 monographs and 9 inventions. In 2005 he was awarded the medal of the President of Kazakhstan “25 years of Independence of Kazakhstan”.