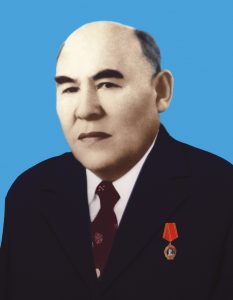 Academician of the Academy of Sciences of the Kazakh SSR, Doctor of Biological Sciences, Professor

Darkanbayev Amirbai Baybosynova famous scientist, biochemist, academician of the Kazakh SSR, doctor of biological Sciences, Professor, honored worker of science of Kazakh SSR, a prominent public figure. He graduated from the biological faculty of the M.V. Lomonosov Moscow state University (1936). In 1941, after graduating from the Institute of biochemistry, USSR Academy of Sciences, he defended his thesis, and in 1953 he received the degree of doctor of biological Sciences. He is a follower and colleague of outstanding scientists A.N. Bach, A.I. Oparin, R.I. Smirnov, V.L. Kretovich. From 1955 to 1961 – rector of KazGU by S. M. Kirov, from 1972 to 1983 – member of the Presidium of the Kazakh SSR and academician-Secretary of the Department of biological Sciences. In 1965 T.B. Darkanbayev founded in KazGU by S.M. Kirov laboratory of biochemistry of the metabolism of plants, and in 1973 the laboratory of biochemistry of grain crops in the Institute of botany, Academy of Sciences of the Kazakh SSR (now M.A. Aitkhozhin Institute of molecular biology and biochemistry, Ministry of education of science of the Republic of Kazakhstan).

For merits in development of biological science and training T.B. Darkanbayev is awarded the order of Lenin (1971), two orders “Badge of honor” (1945,1961), and also medals of the USSR and certificates of Honor of the Kazakh SSR.

Academician T.B. Darkanbayev is a major organizer of science and the founder of the biochemical school in Kazakhstan. The main scientific works are devoted to the grain biochemistry of the most important cereal crops, protein-carbohydrate metabolism, the influence of genetic factors and soil and climatic conditions on the formation of grain quality. T.B. Darkanbayev and his students made a significant contribution to the knowledge of the laws of formation and storage of proteins, the formation of multiple molecular forms of key enzymes of respiration and protein-carbohydrate complex in the process of grain maturation. Research on the evaluation of nutritional merits, biochemical characteristics and technological properties of wheat in Kazakhstan were not only fundamental works in the field of grain biochemistry, development of the theory and practice of technical biochemistry and applied Enzymology, but had an important national economic importance.