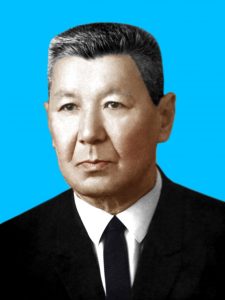 Klyshev Lucban Klyshevich is one of the founders of biochemical science in Kazakhstan. He founded such scientific areas as biochemistry of secondary compounds, biochemistry and physiology of salt resistance of plants and Phytochemistry. He stood at the origins of the study and rational use of plant resources of Kazakhstan, as producers of the most valuable physiologically active substances, and made a great contribution to the development and implementation of the national economy of practical proposals for the use of waste production of physiologically active compounds. Klyshev L.K. was the initiator of the development of research in Kazakhstan enzyme systems involved in nitrogen exchange, which allowed to justify the scientific basis for the use of various forms of nitrogen fertilizer.  The scientific achievements of Klyshev L.K. associated with basic research in biosynthesis, transformation and hinolinovy pyridine alkaloids, determination of physico-chemical properties of enzymes involved in their metabolism.

Klyshev Lucban Klishevich was born on March 14, 1909 in village number 12 Chingirlau district of the Ural region. Due to the lack of school in the village, he began to study almost as a teenager and at the age of 20 he graduated from Junior high school in the district center of Chilik. In 1929 the permit Aktobe’s OKRONO Klyshev Lucban arrived in Kyzyl-Orda and in spite of lower secondary education, passed the entrance examination and entered the Institute of education. After graduation, in 1932 he entered Alma-Ata at the faculty of natural geography of the Abay Kazakh pedagogical Institute and in 1935 he was sent as a teacher to Balkhashstroy, and from there on the ticket of the the Central Committee of the Leninist Communist youth Union he came to Almaty and started working at the Kazakh Branch of the USSR Academy of Sciences, the younger scientific employee of the Botanical garden. To work in the field of chemistry of plants, without departing from the main activity, Klyshev L.K. was held a large workshop on the physiology and biochemistry of plants in the University and has mastered the General methods of research.

In 1938 by order of the Chimkent chemical pharmaceutical plant and the task Kazakh branch of the Academy of Sciences of the chosen object of their research, Anabasis leafless, which is a valuable raw material plant unique in the world anabasine production. In the same year, gathered a large experimental material, Klyshev L.K. enrolled in graduate school at the Department of physiology and biochemistry of KazGU by S.M. Kirov. His supervisor was a famous scientist, Professor S.O. Grebinsky.

After graduating from graduate school during the great Patriotic war, Lukban Klyshev worked as a senior researcher, and then head of the laboratory of plant poisons of the Kazakh branch of All-Union Academy of agricultural Sciences named after Lenin. In 1943-1944 during the semi-annual trip to the Institute of biochemistry, USSR Academy of Sciences (Moscow) under the leadership of corresponding member of the USSR Academy of Sciences, Professor A. I. Smirnov he developed the colorimetric method for the determination of anabasine in a mixture of alkaloids of Anabasis, which essentially determined the success of his work in the further study of the Anabasis leafless. This method was later improved and applied for the control of all technological process of production of anabasine sulfate.

In 1944 Klyshev L.K. organized the first lab in Kazakhstan, the laboratory of chemistry of plants the Institute of botany, Academy of Sciences of the Kazakh SSR.

In 1945 Lucban Klyshev on the Academic Council of KazGU by S.M. Kirov successfully defended his thesis “Biochemical studies of alkaloid saltwort (Anabasis-insigek)”. This work in 1947 with minor reductions was published in the Proceedings of the Institute of botany. It was the first time that biochemical characteristics of Anabasis were given, the regularity between the accumulation of alkaloids and other plastic substances and edaphic conditions was shown, and the prospects for further research in this direction were proved.

In 1952 Klyshev L.K. with his lab in the chemistry of plants was transferred to the Botanical garden, which he headed as Director, and there continued his work under the Anabasis leafless. This work, formed in the form of a report on the natural reserves of Anabasis throughout Kazakhstan and on ways of their rational use, was presented to the Council of Ministers of the Kazakh SSR and the USSR Lecrastrest in 1955.

In 1955 decision of the Presidium of the Kazakh SSR Lukban Klyshevich was sent for 2 years to the V.L. Komarova Botanical garden USSR Academy of Sciences (Leningrad) to pass the course. Under the guidance of Professor I.M. Ilyin, he completed and defended his doctoral dissertation “Biological basis for the use and introduction of leafless Anabasis into culture”.  The results of the doctoral thesis, including a comprehensive characterization of the raw material plants of Kazakhstan with all cartographic material, was published in 1961 in Alma-Ata in the form of the monograph “Biology of Anabasis leafless”.

Klyshev L.K. has devoted considerable attention to the training in biochemistry and was a tremendous help in the development of young talented scientists. He created the Kazakhstan school of biochemists studying the metabolism of secondary compounds in the plant cell.  From 1957 to 1962 Lucban Klyshevich worked as a Professor of Gene and read a course of lectures on physiology of plants. Later he was a lecturer at the same course in KazPI and KazGU.

Klyshev L.K. is the author of 250 scientific works, including 5 monographs and several patents.

Scientific, scientific, pedagogical and social activities of Lukban Klyshevich Klyshev, his services in the development of biochemistry and training of scientific personnel were awarded the order of “Badge of Honor”, “Friendship of peoples”, medals and Diplomas of the Supreme Council of the Kazakh SSR and the Presidium of the Kazakh SSR.