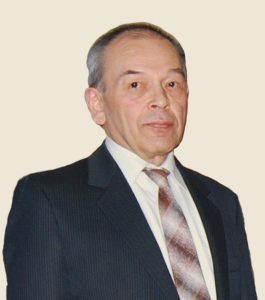 Balmukhanov T.S. was born in the family of a prominent scientist, founder of Kazakhstan Oncology, Professor, Doctor of medical Sciences, academician Saim Baluanovich Balmukhanov. His main works were devoted to tissue radiosensitivity and methods of its change, he discovered the phenomenon of acquired radioresistance of the tumor. More than half a century, Saim Baluanovich devoted to the study of the consequences of nuclear tests on the health of the population and the environment of the areas adjacent to the Semipalatinsk nuclear test site. Not coincidentally, the main direction of research Timur Saimovich – the study of molecular mechanisms of action of different radiations on biological macromolecules.

Timur Balmukhanov was born on March 24, 1956 in Alma-Ata. After graduating from high school in 1973, he entered the faculty of biology at the M. Lomonosov Moscow state University, which he graduated in 1978. In the same year Timur Saimovich was employed in the Institute of botany, Academy of Sciences of the Kazakh SSR and on secondment to the Institute of molecular biology of the USSR Academy of Sciences.

In 1982, Balmukhanov T.S. defended his thesis “Mechanisms of inactivation and repair of UV-irradiated plasmids E.coli” under the guidance of doctor of biological sciences Zavilgelsky G.B. It was shown that the system dereplication reparations UVR restores DNA plasmids and phages intensively in 2-3 times in comparison with bacterial DNA. Repair of bacterial DNA was carried out mainly in the postreplicative REC system. The result of these studies is the first established phenomenon of the appearance in DNA of bacterial plasmids lethal damage caused by the action of high-intensity laser UV radiation (above 1011w/m2). As a result of irradiation, single – and double-strand breaks in DNA were formed.

After defending his thesis, Timur Saimovich worked in all-Union cardiological center, Academy of medical Sciences of the USSR, where he mastered methods of enzyme immunoassay and post-fusional technology.

In 1988, Balmukhanov T.S. was accepted to the position of senior researcher of the laboratory of biochemistry of alkaloids (since 1991, genome laboratory) of the M. Aitkhozhin Institute of Molecular Biology and Biochemistry, and from 1998 to 2009 to the Department of the group “human genome” and the organization of the laboratory of structural and functional genomics – as a leading researcher.

Together with Timur Saimovich Balmukhanov and a Junior researcher Abay Erkenov developed a new method for extraction of DNA-polymerase-based single-stage moreover, the purification procedure of this enzyme. DNA polymerase had activity greater than previously documented (more than 60 000 units act/mg).

As a visiting Professor (1996-1997) he worked in the Institute of radiobiology and medicine of the Hiroshima University, where Timur Saimovich was continued study of the mechanisms of action of ionizing radiation. These studies investigated the features of p53 protein synthesis in human cell lines with different radiosensitivity, obtained from patients suffering from pathologies such as ataxia-telangiectasia (AT) and Nijmegen syndrome (NBS – Nijmegen breakage Syndrom) after gamma irradiation in different doses. A feature of NBS cells is a weak response to radiation, they were studied features of the synthesis of P21, activated by the p53 protein after DNA damage. These works became one of the parts of research PhD thesis K. Matsuura, who rightly called Timur his teacher. The joint work of a young doctor and molecular biologist from Kazakhstan was published in the Nagasaki Journal of Medical Science, Biochemical and Biophysical Research Communication, Genetics and presented at a number of international congresses.

Since 1998, T.S. Balmukhanov has focused his work on the study of the consequences of nuclear tests at the Semipalatinsk nuclear test site (SNTS). The analysis of data related to the prevalence of morbidity in the territory of the former SNTS (Kainar and Sarzhal villages) showed a significant increase in thyroid abnormalities, congenital developmental defects, infectious, endocrine and gynecological diseases, as well as an increase in mortality. In comparison with indicators of settlement Kokpekty, accepted as control, it is established that the increased level of morbidity remained in a row of three generations that means possibility of their inheritance and formation of genetic defects in posterity of the irradiated persons.

The results of these works were issued in the form of a doctoral dissertation “The effect of ultraviolet radiation and ionizing radiation on biological macromolecules and organisms”, which was defended by Balmukhanov at the dissertation Council D 09.17.04 at the Kazakh State Medical Academy (Astana city) in 2008.

From 2009 to 2016, T.S. Balmukhanov headed the laboratory of structural and functional genomics of the Institute.

Under his leadership, the laboratory staff has implemented 8 projects:

– “Creation and molecular genetic characteristics of DNA bank of uranium mines workers exposed to chronic exposure to low doses of radiation. Creation of an electronic data bank on the genotypes of people exposed to constant exposure to radiation in small doses” – 2008-2010 years;

– “Creation of genetic passports, monitoring of genetic diversity and genosystematics some biotechnologically valuable microorganisms representatives of 11 genera. Development of a test system for genetic identification of some strains of the genus Kluyveromyces” – 2008-2010 years;

– “Features of structural and functional organization and expression of cytokine genes and some suppressor factors in autoimmune and oncological diseases. Development of principles of their early diagnosis for treatment and prevention” – 2009-2011 years;

– “Molecular genetic monitoring of the effects of low-dose radiation exposure of personnel of uranium mining and uranium processing industry” – 2012-2014 years;

– section of the program “Reducing the risks of production-related morbidity in workers of the uranium industry of the Republic of Kazakhstan” – 2013-2015 years;

– Scientific and technological progress “Structural and functional features of the genome in breast cancer for early diagnosis and prognostics” – 2013-2015 years.

Balmukhanov T.S. is the author of more than 100 scientific publications, of which more than 40 are published abroad, two monographs, more than 15 patents.