In 1991, Academician of the Kazakh National Academy of Sciences N.A. Aitkhozhina founded the Genome Laboratory – the first laboratory in Kazakhstan for the study of the plant genome and the human genome.  In 2009 “Human genome” group separated from the laboratory to become the Laboratory of Structural and Functional Genomics. 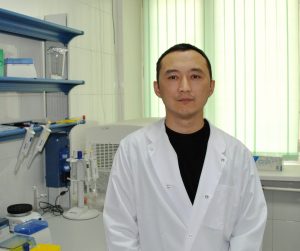 A specialist in molecular genetics, the author of more than 30 scientific papers

1990-2018 – General Director of the M.A. Aitkhozhin Institute of Molecular Biology and Biochemistry

1990-2012 – Founder and head of the first in Kazakhstan Laboratory of genome in the M.A. Aitkhozhin Institute of Molecular Biology and Biochemistry

1974-1983 – Junior, Senior and Leading Researcher of the Institute of Botany

1970-1973 – Graduate student of the V.A. Engelhardt Institute of Molecular Biology of Academy of Sciences of the USSR, Moscow

Publications: research results published in more than 300 scientific papers, many of which – in leading journals abroad. Author of 29 certificates and patents.

2012-2015 – Member of the Supervisory Board of the “Center of Life Sciences”, Nazarbayev University

2003-2010 – Chairman of the doctoral dissertation Council at the Institute, specialty “molecular biology” and “biochemistry”

1996-2008 – Member of the editorial board of the journal “Molecular Biology” of RAS, Moscow

1990-1991 – Member of the Scientific and Technical Council and expert of the projects of the state program “Priority problems of genetics”, Moscow

1987-1991 – Member of the Interdepartmental Scientific Council on the priority areas of physico-chemical biology and biotechnology of the State Science and Technology Committee at the Council of Ministers of the USSR, Moscow

Winner of the “Platinum Tarlan” Award in the “Science” nomination (2000)

Diplomas from the Academy of Sciences of the Kazakh SSR, NAS RK, MES RK for fruitful work and contribution to the development of science of Kazakhstan.

1989-1991 – People’s Deputy of the USSR, member of the Committee on Science of the USSR Supreme Soviet

1995 – Member of the Republican Council of Women 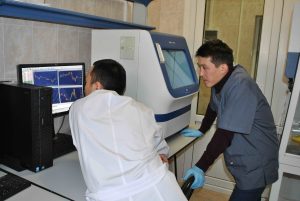